Here are some sentences I would love never to hear uttered at a race again:

First and foremost, guess what? This race is going to suck no matter how “in shape” you are. That’s the secret of cross (and racing in general)- it always hurts.

Second, the phrase “in shape” is total nonsense. What does “in shape” even mean? Every body has a shape. There are literally no bodies that have no shape.

When we use the phrase “in shape”, it implies that there’s a certain shape a body should be in before it can participate in a sport- and if one does not achieve that desired shape, they cannot be in the sport. And for those who have a body shape that is no one’s “ideal” shape for participating in sports, that phrase can feel alienating.

Why do we feel like we have to be a certain way, look a certain way, be at a certain level, have certain clothes/bikes/shoes/etc, before we feel worthy to line up on that starting line? Why are we so hard on ourselves? The beauty of cross is that it’s very accessible for anyone at any level- any fitness level, any skill level. I don’t do any other sports, so I can’t say what other sports exists like cross, but I think it’s one of the things that make cross so special and why I love it so much.

Let’s accept our bodies for how they are NOW, not how we want them to be. Many of us are finding cross in our “later” years and aren’t the athletes we used to be- or maybe never were! The truth of aging is things change and bodies change and life happens. We’ll probably never have the same body or energy or fitness we did when we were younger, but that doesn’t mean our bodies aren’t still amazing!! Don’t let the idea that you need to look/feel/bike a certain way keep you away from the starting line.

If you want to skip a weekend of racing because you’re not feeling it- go for it! Sometimes you’re just not in the right headspace to enjoy racing and that’s okay. But be kind to yourself in the process – say “I’m not into racing today, but I’ll see how I feel next week and give it a try.” Let’s avoid writing off an entire season because you aren’t quite where you want to be physically right now.

While I think phrases like those mentioned above are unhelpful at best and harmful at worst, if one absolutely must make a comment, let’s change up the narrative. Better things to say would be:

Cross has taught me the value of being kind to myself. That’s what this whole post is really about. A plea for all of us to show compassion to ourselves, to be kind to ourselves. I don’t like hearing those phrases mentioned above because hearing those phrases make me SAD. They are an indication that the person saying them doesn’t practice kindness towards their own body and self. Through cross I’ve learned how to celebrate the small personal successes and accept what my body can do, rather than what it can’t. And I just want everyone to do the same. It’s a journey, but it has to start somewhere and why not here, in the starting grid of a cross race?

Last year I wrote a series of “Cyclocross and You” posts, aimed at people interested in getting into the sport but not sure where to start.

For ease of access, I wanted to collate all those articles in one place. So, for your reading pleasure, here all the articles I wrote about getting into ‘cross!

Cyclocross and You: The Bike

In which I sum up the different kinds of bikes which can be used to race cross and offer suggestions on how to find the right bike for you.

Cyclocross and You: The Skillz

In which I review the different ‘cross specific skills most used in races and offer suggestions on how, where, and what to practice.

Cyclocross and  You: Signing Up

In which I explain how to sign up for a race, to finding races, to figuring out your category, and if you need a license.

Cyclocross and You: Race Day

In which I present curated lists of things to pack the night before and walk you through what to do when you arrive at the course.

In my 4 years of racing cross, my eyes have really been opened to how often the folx I race with lower the bar for themselves while getting ready for a race (myself included!).

“Oh, I’m going to line up in the back because that’s where I’ll be the whole race.”

While this behavior is most prevalent at the start line and in the hours before a race, I hear it all the time in practices, clinics, at any bike related activity. I didn’t even realize I was doing it myself until I heard it over and over again from the women I raced with – and it started to annoy me!

“Okay everyone! I’ll try to stay out of your way when you’re passing me, because I’m really slow!”

It first annoyed me because as someone who is statistically most likely to be in the bottom 2 spots, I was irritated by these women talking about being last and then smoking me in the race.

“What’s the prize for DFL, because that’s the only prize I’m winning!”

But then I was bothered by it once I probed a little deeper into why women might be making these statements.

“Oh, I’m just using the race for training so you all are going to beat me.”

Once I started examining my own emotions at the start of a race and analyzing the rationale behind why we might make these kinds of statements, I came up with two theories:

“Don’t worry about being slow, because I’ll definitely be slower than you.”

I’m finding this kind of talk more and more damaging. And while I can forgive folx for this kind of talk, as I understand they are speaking from a place of insecurity and nervousness, I can’t excuse it or let it go unchecked anymore. When you talk like that, you are only hurting yourselves – if you go into a race with a negative mindset, how are you going to have the best race possible?? How does saying things like that make you a stronger person? It doesn’t help you OR anyone around you to talk like that.

All of this is to say, let’s make a pledge this season to cut that negative self talk crap out!

It has been empowering and eye opening and exciting to watch so many folx beat their fears and try ‘cross racing. I know you are so much stronger and capable than many of you think you are and it kills me to hear you talk down about yourself before a race. If we’re always being negative about ourselves, how expect others to be positive for us? Own who you are and what you’re capable of. Own your nervousness and the goals you’ve set for yourself! Instead of negative self talk, let’s try saying these things instead before a race:

“I’m racing for myself and I’m excited to see if I can accomplish my goals!”

“I’m feeling anxious about how much racing is going to hurt!”

“I feel slow today, but I’m going to give it my best shot.”

“I’m so nervous about the technical parts of this course! It’s so challenging and I wonder how often I’m going to have to get off my bike.”

“Racing makes me so tense I either want to throw up or poop. Maybe both.”

Pick a goal, like trying to do a proper remount every time, trying out the scary feature at least once, or catching one person ahead of you and focus on THAT instead of worrying about letting others or yourself down. If you give it your best shot, you won’t let anyone down and you’ll feel awesome about your effort, no matter where you finish!

You’ve done the prep: got the bike, practiced the skills, and actually signed up for a race! But, how do you get ready for race day? And what do you need to do once you get to the course? Race day does take some prep, and navigating the registration table can be a bit daunting if you’ve never done it before, but it quickly becomes routine.

What should I do the night before a race?

As most beginner races have the earliest race time slot, the more prep work you do the night before, the later you can sleep in the day of!

END_OF_DOCUMENT_TOKEN_TO_BE_REPLACED

Cyclocross can seem intimidating, what with all the jumping on and off the bike, navigating uneven terrain, etc. But with practice and some on-course experience, you can become comfortable tackling any course. There are a lot of ‘cross-specific skills to learn that you will continue to work on and refine as you keep racing.

This post will give you an overview of some of the core cyclocross skills and which of those skills you may want to work on first as you’re getting into racing.

What skills do I need to learn?

There are a number of skills that are unique to cyclocross racing:

There are also a number of skills that you might not think of as being unique to cyclocross, but in fact they are among some of the most fundamental to the sport:

END_OF_DOCUMENT_TOKEN_TO_BE_REPLACED 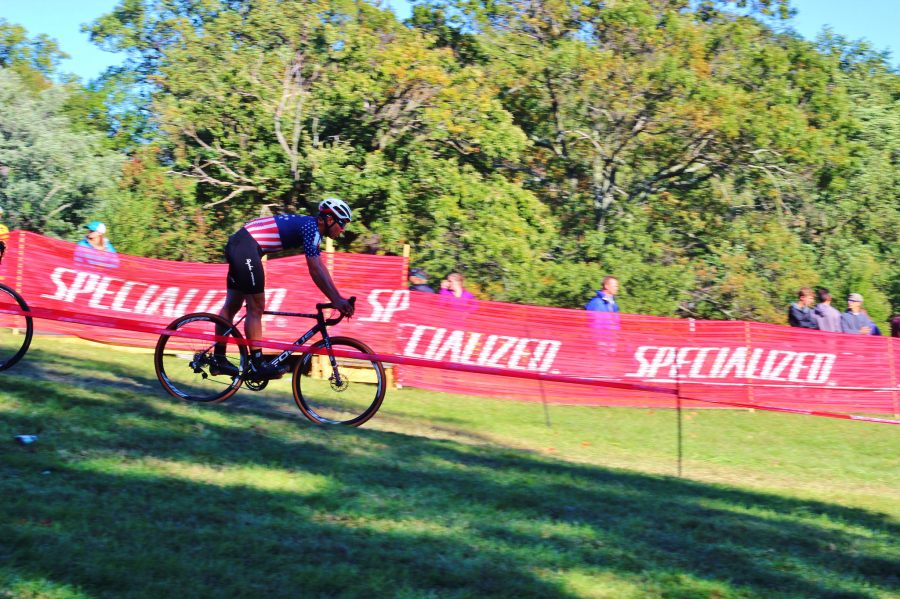 I’m not sure why I signed up for Charm City Cross. I knew it was a UCI race*, but I’d raced DCCX last year, which was also a UCI race, and that wasn’t too bad. I mean, it was hard, but I survived. I was even riding a borrowed bike that didn’t have ‘cross tires and was able to ride most of the course. Maybe because I had regretted not riding it last year. Or maybe I was ready for a new challenge.

Whatever it was that possessed me to sign up for Charm City, I felt sick to my stomach as soon as I did it. It has a long sand section and I knew that would suck (and I’ve never ridden in sand). It was a LONG course – over 2 miles! That’s a long lap. There was no beginner category, so I’d have to race with women who were faster and more experienced than me. Plus, it had a flyover, which terrified me – mainly I was terrified that it would be too steep and I wouldn’t be able to make it over without falling down.

END_OF_DOCUMENT_TOKEN_TO_BE_REPLACED

Signing up for races

How do I find races in my area to sign up for?

The best place to find cyclocross races in your area is at BikeReg.com. This is the website (almost) all races in the mid-Atlantic use to facilitate registration. You can search for races near your zip code, by type (“Cyclocross”), or region, and all the cyclocross races that are using BikeReg for registration will show up in the search results, sorted by date by default, with the earliest race appearing first in the list.